We are so very fortunate to see the following tiles from a recent acquisition of a Chinese Bakelite set by Mah Jongg teacher extraordinaire, Johni Levene. Johni, in her inimitable generous style, agreed to share these exquisite tiles with us. Not only does Johni have a fabulous Mah Jongg collection but she also sells vintage Mah Jongg sets. In addition to this, Johni will repair your tiles as well as having a huge (and I have see pictures of it – it is HUGE!) orphanage for matching any tiles you might be missing from your set. When my friend S1 was recently in Southern California, she gave Johni a call – Johni immediately invited her over to her beautiful home to join in a game of Mahj. S1 has raved about Johni and her friends – they couldn’t have been more welcoming or friendlier and, just as we expected, they were great Mah Jongg players. If you are ever looking for a teacher, or for a beautiful vintage set, or repairs to hurting tiles, or a match for a missing tile, contact Johni at Lajohni@aol.com – you won’t be sorry!

And now, sit back and enjoy these glorious tiles, courtesy of Johni Levene.

I wish my pictures were as beautiful as the ones Johni originally took but I think you will get the idea from what we see here. 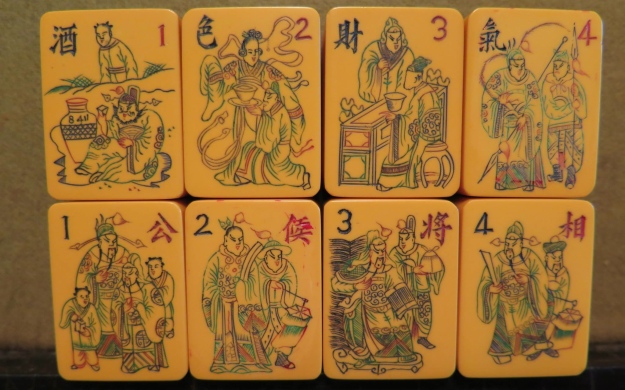 Ray Heaton was able to interpret these gorgeous flowers. Here is what he had to say:

Top four flower tiles:
The top four refer to “Wine, women, wealth, temper” and are together referred to as the Four Cardinal Vices, “Drunkenness, Sex, Avarice and Temper”.
In Quanzhen Daoist teachings, these are the obstacles to attaining health, longevity and the calm stillness that are the goals of what was the dominant monastic order of the Ming period – during the Ming period a number of songbooks were printed with titles such as “New Collection about the Four Seasons and Five Watches of the Night” (dated around 1470), a collection of songs referring to popular stories such as “The Story of the Western Chamber” and “The Story of the Incense”. One such song (or rather set of several songs), was titled Yong, Jiu, Se, Cai, Qi, or songs on drunkenness, sex, avarice and temperance.

Bottom four flower tiles;
Coincidently, I have had some correspondence recently with others about the meaning behind the Chinese characters of the bottom set.
The words ‘gong, hou, jiang, xiang’ may simply refer to the nobler ranks in society of Duke, Marquis, Generals and Ministers.
But, in Chinese, there exists a fixed phrase called ‘wang hou jiang xiang’ which translates as the four titles of “king, marquis, general and prime minister”, (so, only the first word differs).
During the Zhou dynasty, the rulers of dozens of Zhou principalities called themselves ‘Gong’, a word that now denotes the title of ‘Duke’, rather than using ‘Wang’ denoting king.
I am reading a book titled, in English, ‘A Thousand Pieces of Gold’ but has a Chinese title of 一字千金, Yi Zi Qian Jin, or ‘Each word is worth a thousand pieces of gold’.
In the book the origins of ‘wang hou jiang xiang’ is discussed, and tells the story of penniless peasants Chen She and Wu Guang rising up to fight against the Second Qin Emperor around 209BC. The Qin dynasty followed the Zhou (the Zhou ruled from 1046BC to 256BC).
Chen She used the precepts of Confucianism (where any man could become a ‘Jun Zi’ by conduct rather than noble birth – a ‘Jun Zi’ is someone who is fit to govern) in the phrase ‘Wang hou jiang xiang, ning you zhong hu’ or ‘Kings and marquises, prime ministers and generals, such men are made, not born’.
Chen She’s revolt was referred to two thousand years later by Sun Yatsen’s followers in overthrowing the Qing and by Mao Zedong in established Communist China; Mao stating “…Chen She’s success and ours both prove that the people and the people alone are the moving forces of world history…”.
So if we accept Gong and Wang (Duke and King) being used interchangeably around the time of Chen She, and that Chen She’s words and deeds were and still are in people’s minds, then could the tiles be referring to this Confucian ideal?

And now, a closer glimpse of these amazing Flowers: 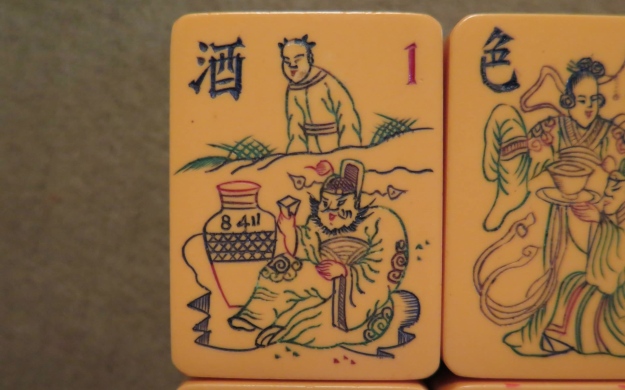 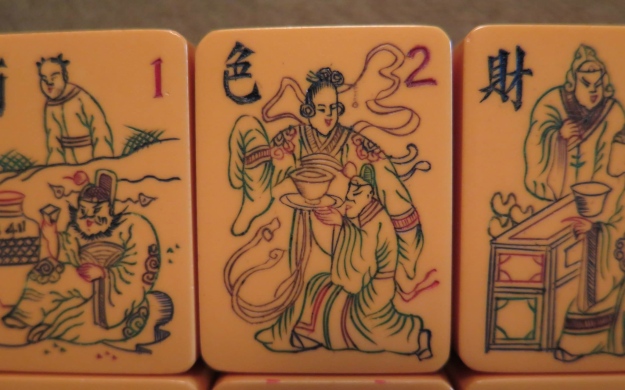 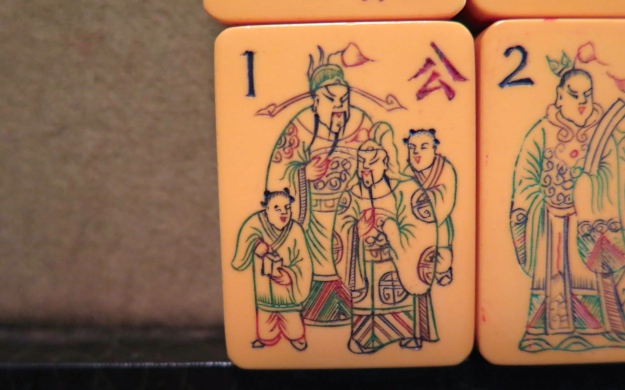 The One Bam is breathtaking.

But this One Dot just sends me over the moon!

Ray Heaton also had an interpretation of this fantastic One Dot:

I guess the #1 Dot shows He He Er Xian, the two spirits of harmony and union and reflect a desire for prosperity. They hold a (usually) round box with the lid slightly open with bats emerging in a cloud of smoke or steam. I think on the tile, the box is just below the central coin, with bats shown above the coin.

2 thoughts on “FEAST YOUR EYES ON THIS…”