It’s Mah Jongg Wednesday for the OMs and once again it is my turn to host – which I absolutely love doing! A fun menu and lots of fun getting everything ready – tomorrow’s posting will feature the hands we played from the new 2014 card and the next day I will post the recipes from our lunch.

I woke up very early this morning to get things going. I’m making Curried Chicken Salad along with a Watermelon and Arugula Salad for our lunch and then for dessert we’ll have mixed berries with a raspberry sauce and the fabulous biscotti from Grace’s Marketplace.

So, first I roasted the chicken breasts.

Once they were cooled down I removed the skin, pulled the meat off the bone, and then cut the breasts up into big chunks. Into the Cuisinart went the chutney, the mayonnaise, the wine and the curry powder and then it was all mixed together until smooth. 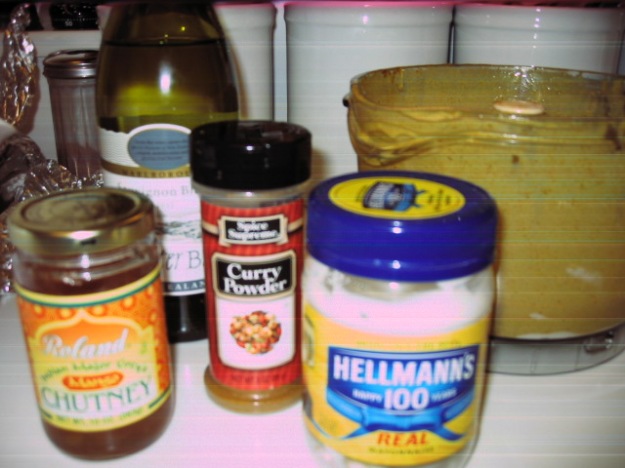 This mixture was then added to the chicken chunks and then the celery, the scallions, and the raisins were added.

Then the bowl went into the refrigerator for a few hours to let all the flavors meld.

In the meantime I started the raspberry sauce. First I combined together a half-pint of raspberries, a little sugar, and a little water and let this come to a boil.

Once it started boiling I quickly reduced the heat and let it cook for about a minute. I then poured it into the Cuisinart and blended this raspberry mixture with a jar of seedless raspberry jam and some Framboise for 20 seconds.

I then poured all of this into a sieve to sort out all of the seeds and produce a seedless raspberry sauce.

Once this was done, the sauce was popped into the refrigerator to chill. It’s such a pretty color!

That’s all for now – I need to set the table and make the Watermelon and Arugula Salad but that won’t happen until right before everyone arrives. Pictures of our lunch and our game play to follow tomorrow…I’m really looking forward to a fun day today with the OMs!

4 thoughts on “GETTING READY…”