Here is a fun article from 2011 published in the San Francisco Chronicle.
Our good friend, Toby Salk, is included in this piece.
MAH JONGG CATCHING ON WITH THE YOUNGER SET
Kellie Ell, Special to The Chronicle – Published, Monday, October 24, 2011

Robin Handwerker (left) and Seth Linden (right) partner up while learning to play the game of Mah Jongg in a building at Dogpatch in San Francisco, California, on Tuesday, September 27, 2011. Seth just started playing about a week ago. 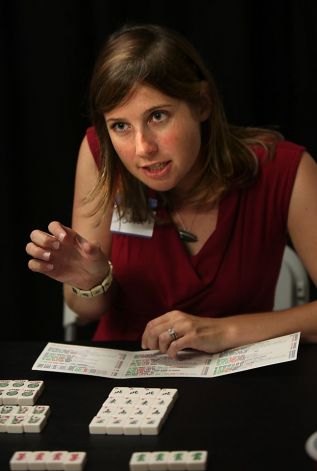 Mah Jongg enthusiast Sara Linden teaching the game of Mahjong to several beginners at her
friend’s photo studio in a building at Dogpatch in San Francisco, California, on Tuesday,
September 27, 2011.
All Photos by Liz Hafalia, The Chronicle

“But not too much wine,” Linden says with a shy smile. “Or else you won’t win.”

There is talk of work and books until Linden declares, “It’s time to get your mahj on!”

A few minutes later, the group is gathered around the dining room table, paired in teams of twos with their poker faces on. The only sound is the plastic tile pieces being passed between players.

Linden, 32, quickly gets down to the task of teaching nine participants the ancient Chinese game of Mah Jongg. In addition to Brown, the group includes lawyers, nurses, and a photographer.

After dreaming for five years of turning Mah Jongg into a full-time business, last spring Linden took the leap and is now “building a tribe” of young people who play.

Not just for grandma

“It’s catching on,” Linden says of what she calls the new Gen X mahj renaissance. “It’s an excuse to unplug, see your friends once a month. I’m trying to convince people that Mah Jongg is not just for their grandma.”

Linden, a Scottsdale, Ariz., native who wears a Mah Jongg-tile bracelet, picked up the game as a teenager after reading “The Joy Luck Club” and received her first Mah Jongg set as a college graduation present. For the past decade, the former medical sales rep has been traveling the country, playing the game, and teaching others along the way. Recently, about 25 players from her Mahj Club, both young and old, had their first Mahj-a-thon to raise funds for a local charity.

Mah Jongg (the spelling varies depending on the country and culture) is similar to gin rummy, but uses up to 152 domino-size tiles instead of cards. Four players get thirteen tiles each and take turns picking and discarding tiles until a player obtains the 14th tile needed to establish a specific hand.

The table game originated in China, and while there is no clear document of when, records show it probably dates as far back as Confucius. Mah Jongg started to spread to other countries near the turn of the 20th century as Westerners in China began to export the game.

It became especially popular during the 1920s in Jewish families, probably because many lived on Manhattan’s Lower East Side next to Chinatown. In 1937, a group of Jewish women in New York created the National Mah Jongg League, helping to standardize the game and interweave the two cultures. Today, the league is made up of more than 350,000 members. In 1999, the American Mah-Jongg Association was formed, hosting tournaments all over North America.

Linden is one of many spreading Mah Jongg fever in the Bay Area. In the East Bay, Toby Salk hosts weekly multigenerational classes for beginners in a North Berkeley cottage. Sometimes, Linden stops by to help with instruction – or just to play.

The duo met after Linden saw a flyer advertising Salk’s classes at Afikomen, a contemporary Judaic gift shop in Berkeley.

“I was expecting my grandma,” says Salk, of the first time they met. “Some short, older Jewish woman. Then I met her,” she says mimicking how her jaw fell open. “I think it’s always been thought of as an old Jewish lady game. But that’s changing.”

On a recent Wednesday night, as neophytes ranging in age from 29 to 85 shuffle into the cottage, Salk does a show-and-tell of the Mah Jongg sets she’s collected throughout the years.

“This is ridiculous fun!” says Robin Brooks, 58, a psychotherapist in Oakland’s Rockridge, who describes herself as an “L.A. Jew.” Adopted and raised Jewish, she says Mah Jongg is a “playful kind of way to connect with others without the religion, politics and mishegoss.”

In the era of Facebook friends, Mah Jongg offers an opportunity for face-to-face meetings – and combat.

“There are a million different rules,” depending on the personal style of who is playing and where, according to Salk. The New York native insists you don’t have to know the Chinese characters on the tiles to play, and those Internet Mah Jongg games have “nothing to do with what we’re doing.”

Despite the fact that everyone in her family played, Salk didn’t learn until her late 20s, after moving west 35 years ago. Her 95-year-old mother still plays. Three years ago, after being laid off from a “very serious corporate job” as the director of creative services for the Sharper Image stores, she decided to pursue teaching Mah Jongg as a profession.

At the end of the lesson, Salk packs up her car with her Mahj sets. “You’ve got to be sharp on the table. You have to keep up. I like playing very fast, going for the hard hands.” And she’s off, in her white Mazda mini-convertible.

On Wednesday afternoons, Linden can be found in the halls of San Francisco’s Jewish Community Center, where there’s a lot of “shushing” if anyone dares speak too loud. With change purses out and playing cards set firmly on the table, these women are here for some serious Mahj action.

Linden, who is practicing for an upcoming tournament in Las Vegas, is by far the youngest at the table. Some of the women are pushing 90, but they’ve scolded Linden more than once for being too slow.

“It keeps you on your feet. It keeps you crazy,” Linden says. Apparently, her time with the veterans is paying off. “I’ve been keeping up with the bubbies at the temple. Now I can hang.”