Yesterday was Mah Jongg Wednesday for the OMs. It was a wonderful day as not only did we play our favorite game but we also celebrated K’s upcoming birthday. S1 brought Prosecco for the celebration, which we had with dessert – complete with birthday candle for K. And we had a surprise as well – Jim showed up in between his client visits and walked in just in time to join us for lunch. D showed up a few moments later so it was a full house with lots of good friends. The only down side was that J and X were missing – J being in Europe and X being in the country. 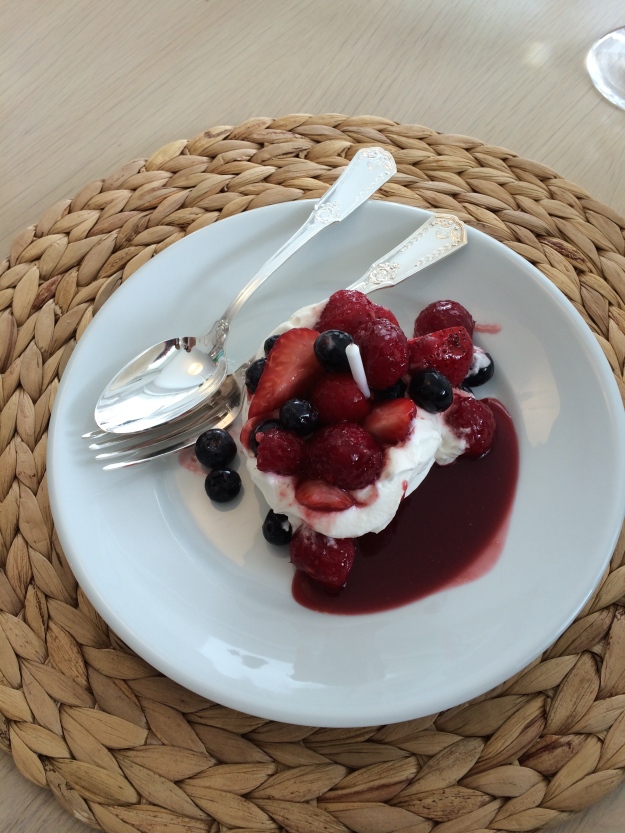 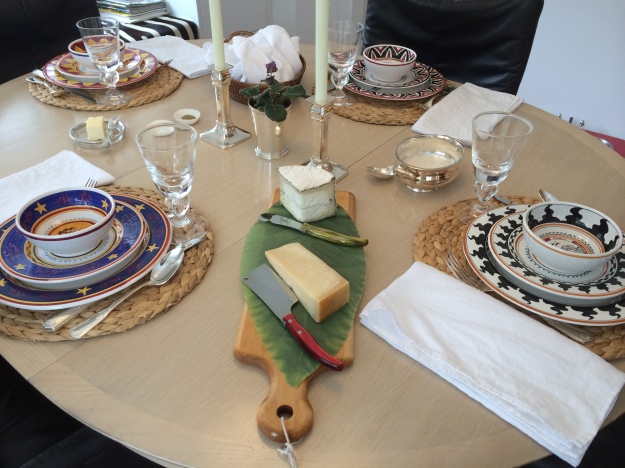 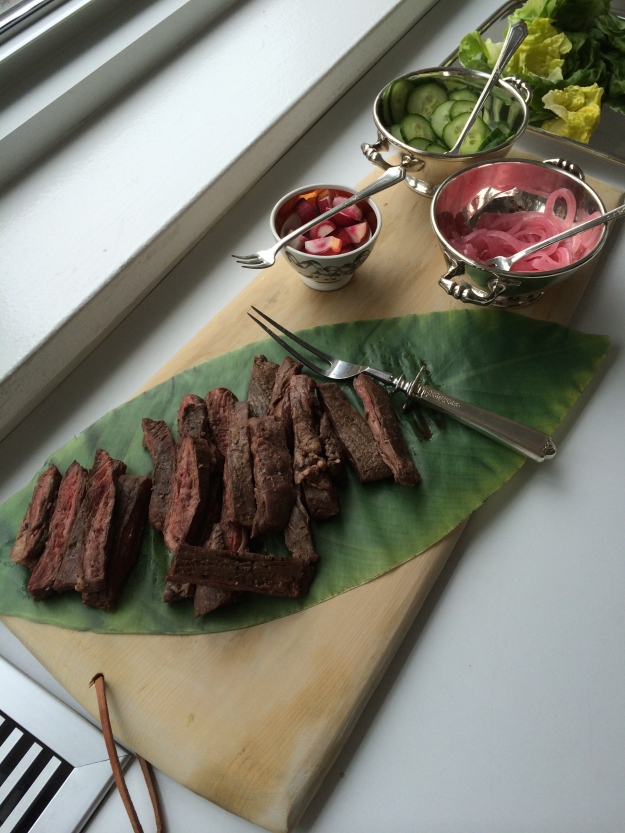 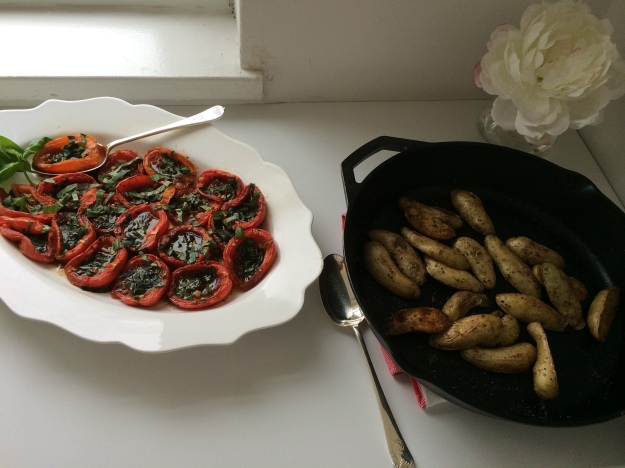 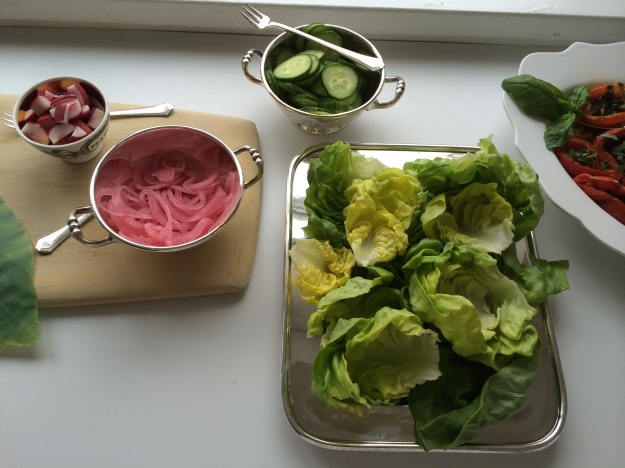 I woke up early on Wednesday morning so decided to add Roasted Tomatoes to the menu. They are so easy to make and so worth whatever effort they might take. All you do is take plum tomatoes and, with a spoon, remove the core and seeds. 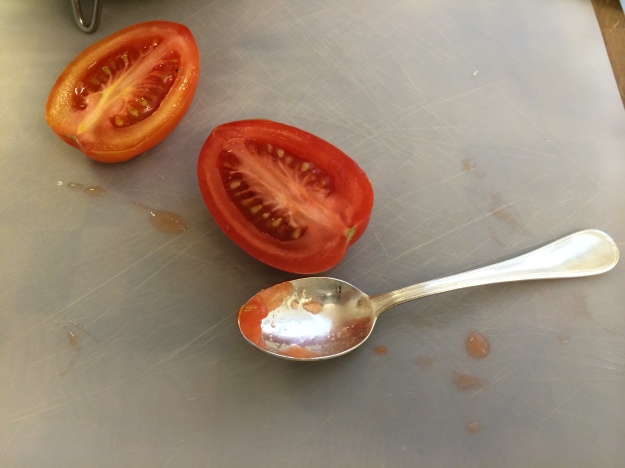 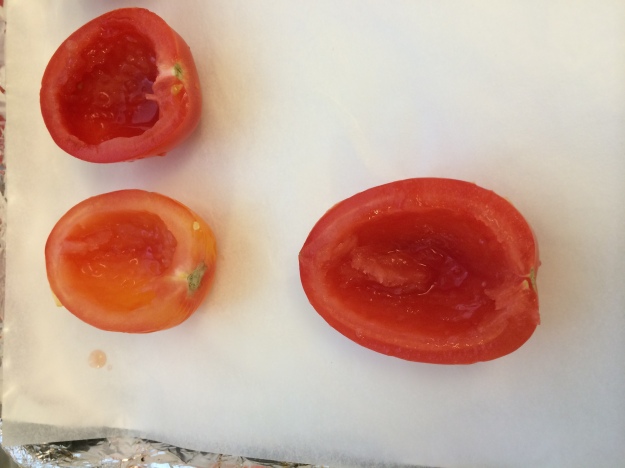 Put them on a parchment-lined cookie sheet, sprinkle minced garlic in the shells and then drizzle olive oil and balsamic on them. Add a little sugar, salt, and pepper and pop them into a very hot oven until they are roasted and caramelized. 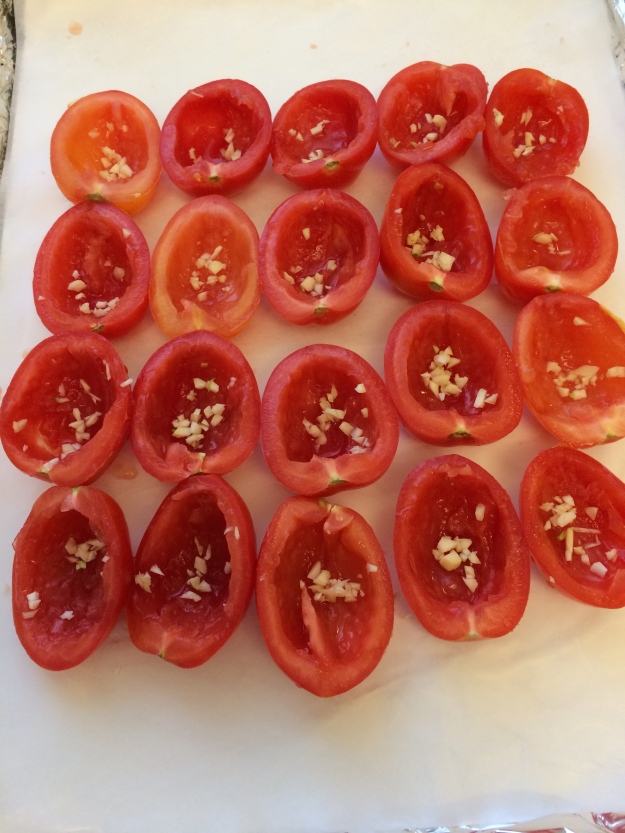 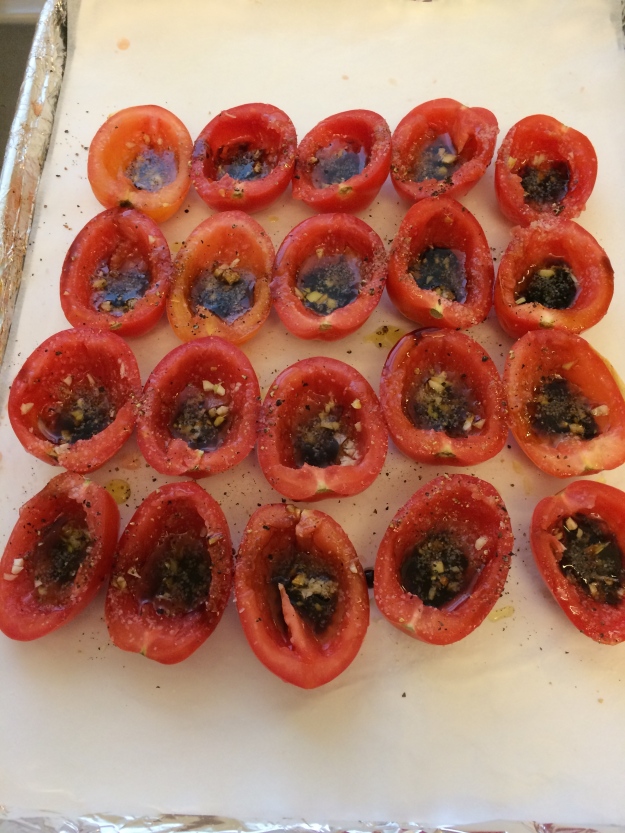 After about 30 minutes they will be done. Bring them out of the oven and sprinkle them with lots and lots of julienned basil. So delish! 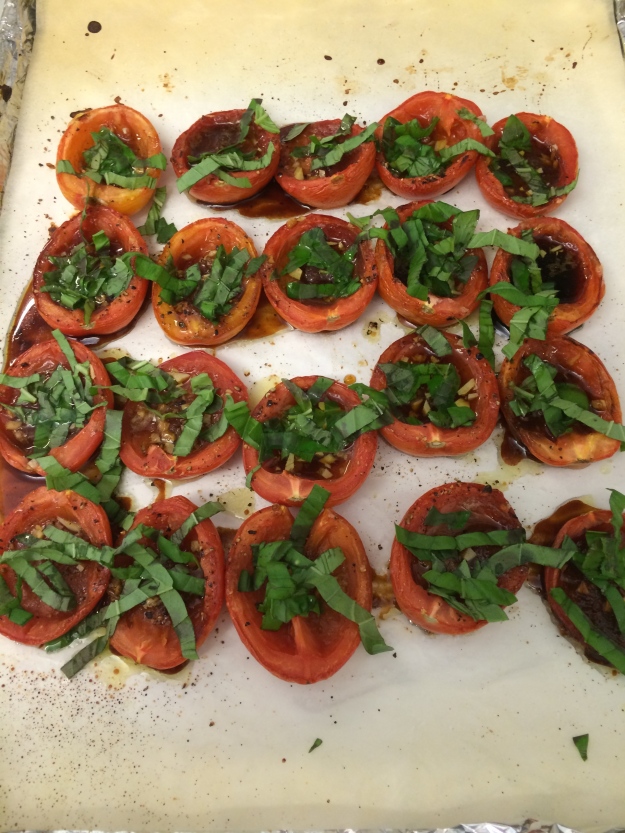 I thought our lunch turned out to be yummy, if I say so myself! The gazpacho, after chilling overnight, was just right. It had a little kick to it, thanks to the jalapeño and the cayenne pepper, that sneaked up on you – really, really good. The Steak Salad with Horseradish Dressing and Pickled Onions was a big hit and everyone really seemed to enjoy it. I’m glad I added the Roasted Tomatoes to the menu. I also had a big chunk of Humboldt Fog cheese and some good Parmesan Reggiano along with a wonderful baguette from Eli’s. Dessert was Mixed Berry Pavlova and that seemed to be a big hit too.

Hey, wait a minute…what about Mah Jongg?!! We had lots of games today and actually continued to play until around 6:30 pm! And the good news is that everyone had a good day – we all were able to declare Mah Jongg a number of times. 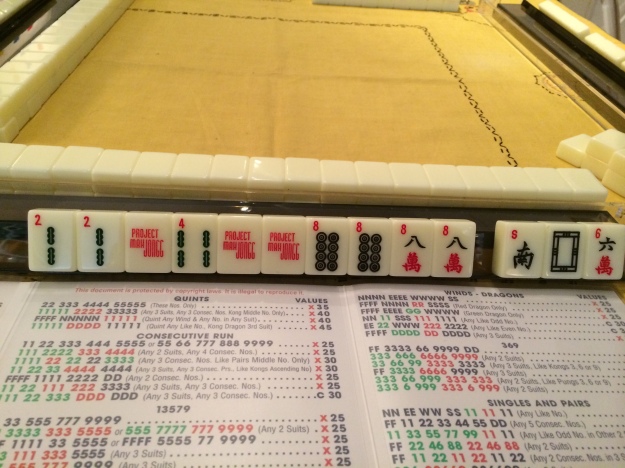 The first 6 Bam was thrown out and I decided to pass on it. And I was glad I did – my turn came around and I picked another Joker. And on my next turn, yet another Joker. So now, all I needed was a 2 Bam (or another Joker!). 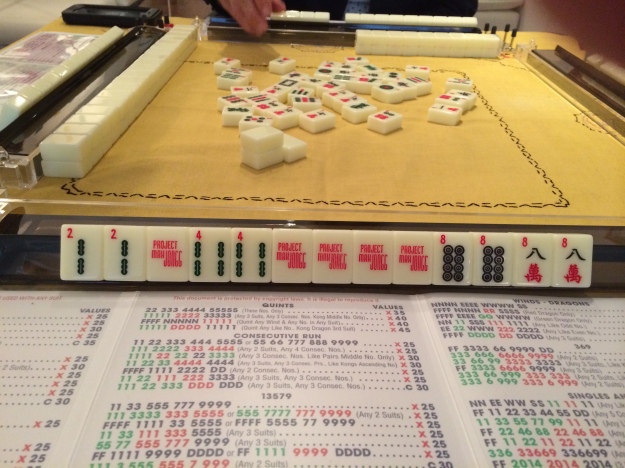 And I was lucky – S2 threw out a 2 Bam and I declared Mah Jongg! As it turned out, I didn’t need any 6 Bams because I had so many Jokers. Now, that is luck! 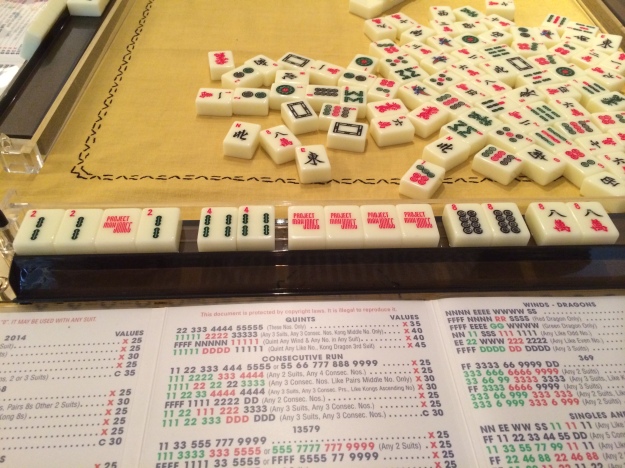 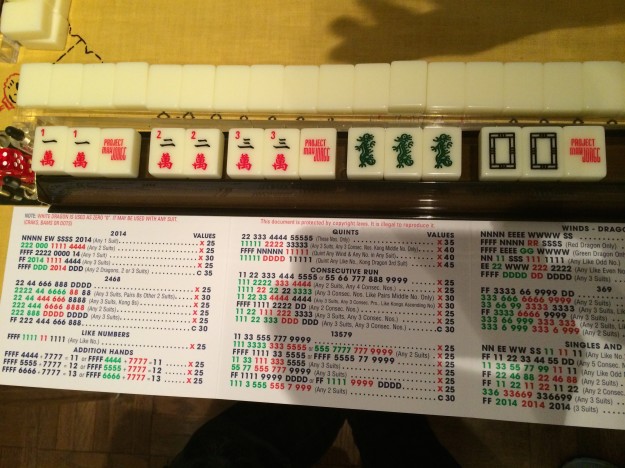 D had a winner with this hand – 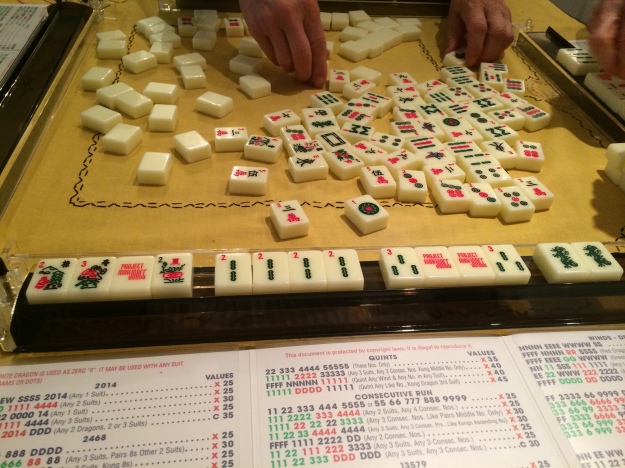 S1 had three exposures on her rack and it was very clear which hand she was playing.  I think I must have been in a sugar coma from dessert because I threw out a 9 Dot without even thinking and she declared Mah Jongg. 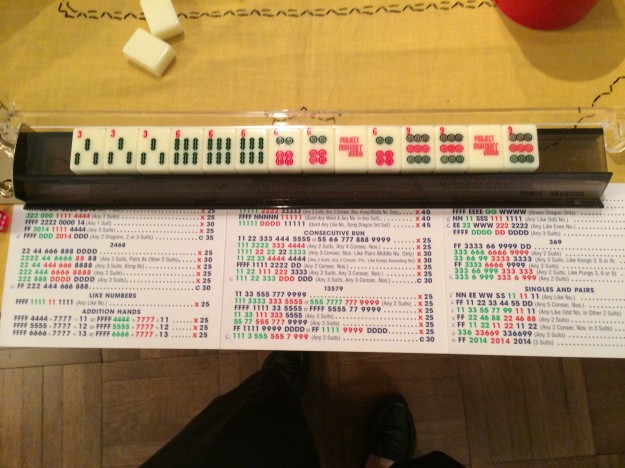 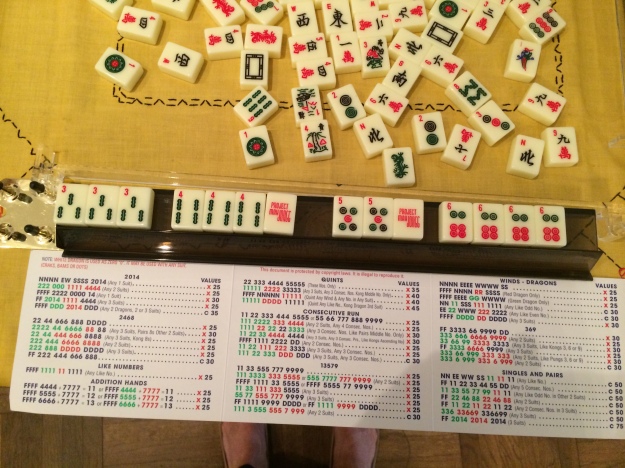 S2 declared Mah Jongg with an Atomic hand – always a thrill when that works out.

All in all, it was a really fun day and hopefully a fun birthday party for K.

8 thoughts on “MAH JONGG AND A BIRTHDAY PARTY”