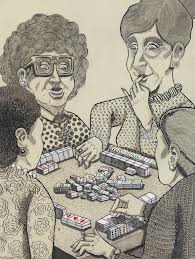 Last week I posted a call out for opinions on the question submitted by Georgelle in Naples, Florida. Thanks to everyone who responded – and there were a lot of you! Read on to learn what everyone had to say…

I discarded a North, called it a Soap, which is what I meant it to be when I discarded.  That was because I simply wasn’t paying attention and picked up the wrong tile.  I had a North and a Soap sitting on my rack together.  I actually picked up a North and threw it calling it a Soap.    One of my opponents saw the North, said that’s not a Soap.  The gals said I had to discard the North — even though I called it a Soap.  Thus the lady Mah Jongg’d with the North tile — which I didn’t intend to throw, but did it stupidly.
I paid for myself and the other two players.  Was that necessary?
Thanks from our whole group — most of whom have been playing for twenty or thirty years.  Me — only about four years, but never did such a stupid thing.  Just was talking and not paying attention.
Thanks for your help.
Here is a sampling of the many responses that came in for Georgelle. But there was one recurring theme in all of the responses – Mah Jongg should be fun – you just need to be sure that these friends will provide that fun time for you and not cause you to be stressed out.  Read on…

* Once again – I love your blog Ann. Reading about little differences certainly increases my excitement for this wonderful game. When issues like this are raised, it reminds me of the challenges of the rules and hopefully makes me a better player…..thanks to you!

* Glad I don’t play with that group! Seriously…this is a game!

* Per the NMJL rules, “a tile cannot be claimed until correctly named. Correctly named tile may then be called for an exposure or MJ, however if MJ is called with the incorrectly named tile, the game ceases. Then, miscalled pays claimant Four times the value of the hand. Others do not pay.”  That is only fair, as you now know what tile player needs for MJ. It apparently doesn’t matter that player picked wrong tile to discard. It is what she called when she discarded it. Our game has table rules too, but never go against official rules like that.

* I agree. Once the tile is down on the table, it’s down. However, it can’t be called until it is correctly named. That happens when someone says…”hey, that’s not a soap!” Then the discarder names it correctly. At some tournaments the miscaller has a point penalty and the person who needs the N gets Mah Jongg. In a home game…we just award the caller MJ and the discarder pays double as in all games when a person doesn’t pick the winning tile himself. As for paying for the other players…that is usually a table rule that has to do with the number of exposures the winner had when the last tile for Mah Jongg was thrown.

* Not a stupid move at all. We have 45 people in our group and I can’t think of one who has not miscalled a tile at one point or another through the years. It just happens. Those are definitely tournament rules they are playing by and that does seem a bit harsh for a friendly game. But I can see the other side too since someone was pretty excited to get their Mahj tile only to see it potentially go away. The important thing is for it to remain a friendly game where everyone feels OK when they do make a mistake like that.

* You are RIGHT.  If a player calls another player dead in error, that player becomes dead and ceases play while the other player continues to play.  That’s why players are so careful when they call another dead. I believe that if there wasn’t a penalty for  that, players would be much more liberal in calling others dead, even possibly in an effort to determine which hand they are playing. Comments or differing opinions? BTW….we love the Mah Jongg addiction!

* To add to my last response. There are actually two scenarios with a miscalled tile: In Georgelle’s game once the tile ( N called a “soap”) is named correctly the game ceases because the player can now take the correctly named N for her Mah Jongg. Georgelle pays double because she threw the winning tile and others pay the face value on the card. No harm is done. Georgelle names the tile correctly and the player gets her Mah Jongg. In the second scenario, if a player needed a Soap for Mah Jongg and the North tile was incorrectly called “soap” the game must cease. Now you know what tile is needed for Mah Jongg….but that wasn’t the tile thrown. The game stops and Georgelle pays 4 times the value of the card. You can’t make Mah Jongg with the wrong tile, but the game can’t continue because everyone knows what tile is needed for the player to win. Hence the penalty to the miscaller. We all understand that Mah Jongg is a game we play for fun…and we do have fun! But standardized rules make it fair for everyone. And when things are fair, everyone has an equal chance of having fun!  Barbara and Susan  The Mah Jongg Doctors

* It sounds like a very rigid group the writer is playing with. If the game is not fun, then I’d hesitate to call it a game.

2 thoughts on “MAH JONGG SHOULD BE FUN…”