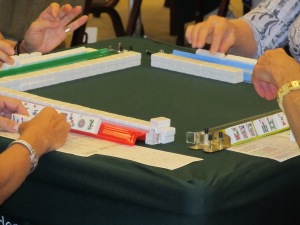 Here’s yet another informative and valuable Q&A from Gladys Grad, the Grand Master of American-Style Mah Jongg Tournaments:

Q. I was playing at a local tournament. Another player discarded my mahj tile. I said “mahj,” and I picked up the tile to put on my rack. I was declared “dead,” because the director said I had to expose my tiles before I was allowed to touch the discarded tile for my mah jongg. I am flummoxed. Is this a new tournament rule? Barbara
A. Your turn doesn’t legitimately begin until you touch the tile (whether it is to claim a discard or pick a tile from the wall when it is your turn); or you have claimed a tile and begun your exposure. In a sanctioned tournament, that tile was yours to claim and put on your rack, whether it was before or after your exposure. (You may wish to contact the NMJL for their rule in your social/home games).
That said…however….your particular tournament-director had designed a tournament according to her own set of “rules,” and therefore was entitled to put her own personal stamp on it (we can be a creative lot). It should be noted however, that when some tournament rules go too far afield from the official tournament rules, the players might not be entitled to receive Mah Jongg Master Points for their efforts.

2 thoughts on “DEAD OR ALIVE – WHAT DO YOU THINK?”