Last week when I was at K’s home for Wednesday Mah Jongg, I met a family friend of hers (from Michigan!!!) by the name of Jackie Suskin. This is a very talented young woman who has just written a new book called, “Go Ahead and Like It,” published by Penguin Random House.

HERE’S THE BLURB ON THIS BOOK: In our digital era of numbly clicking “like” as we impassively watch our friends’ lives scroll by on Facebook and Instagram, along comes an analog antidote: “Go Ahead & Like It,” a new art book/self-help guide by the Los Angeles poet Jacqueline Suskin.

The 29-year-old is well known around town for Poem Store, a self-described “performance poetry piece” she sets up at farmers’ markets, events and weddings. To create each poem, she asks for a subject and then briskly pecks out evocative lines on a vintage Hermès typewriter in exchange for whatever amount the recipient deems it to be worth.

With “Go Ahead & Like It,” Suskin offers up a simple practice that she finds incredibly therapeutic: making lists of things you like. It began several years ago when a friend (to whom she dedicates the book) gave her a list. “It was kind of like a flirty ‘get to know me’ note,” she said. “That’s all it was, just a list of things he likes. I thought it was a fascinating concept to show someone this part of yourself, your interests, but in this really detailed way.” His original list of likes is included in the book, as are many of Suskin’s own. The project is part scrapbook — photographs collaged with a mix of type- and hand-written pieces of paper — and part how-to.

Her mission with “Go Ahead & Like It,” she says, is to help other people pause to take note of the good amongst the banal and quotidian. “To be able to look around and find beauty and inspiration in every little thing, that’s what makes me a poet,” she said. “I want to show anybody that they have that in themselves.”

So, what does this have to do with Mah Jongg, you might be asking. Well, I asked Jackie to create a poem right then and there about our beloved game. And she did! Here it is…

Here’s Jackie at work on the poem…notice the book on the table…! 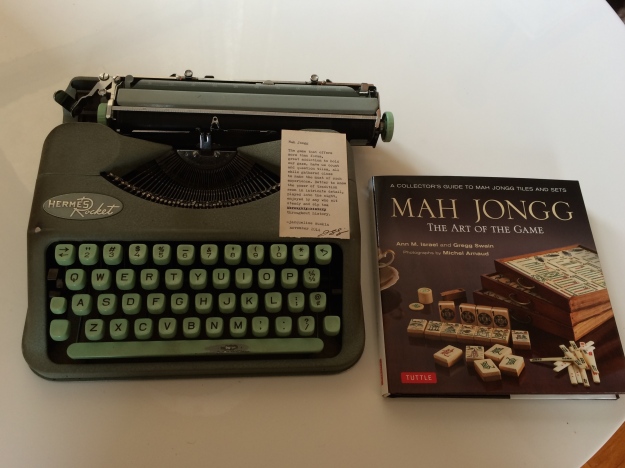 Much thanks to Jackie for this wonderful poem. And here is one more look at the fun book she has written:

3 thoughts on “LISTS AND LISTS OF THINGS I LIKE – SUCH AS MAH JONGG!”