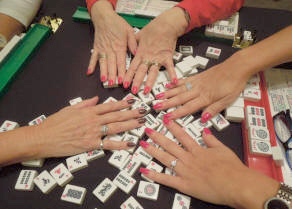 It’s always a good day when I check my in-box and find a new edition of Gladys Grad‘s Mah Jongg Madness Newsletter.

Here’s a question with an answer that, although we have seen it before, never seems to sink in – or as Gladys writes – it continues to vex many tournament players!

Q: I noticed a rule in the latest publication from the NMJL that differs from a rule you have used at your tournaments: A player discards a tile but miscalls it. However, she has the correctly named tile in her hand. Does she take the tile back and discard the named tile from her hand? NMJL Answer: No, You do not replace the tile with named tile….miscalled tile is only correctly named. Will you now use the NMJL rule in your tournaments?  Linda B. TX

A. As you know, TOURNAMENT RULES are more stringent, especially since they may involve prizes, awards and Mah Jongg Master Points.  Unfortunately, ‘purposely misnaming-a-tile’ can be used as a devious “strategy” by a player….to determine if an opponent needs the misnamed tile for an exposure.

If the misnamed tile is claimed, the wily-discarder can then say ….”Oops, it was a mistake, I meant to say something else…,”thereby sabotaging their opponent out of a legitimate exposure.

TOURNAMENT RULES are as follows:

11. MIS-NAMING A TILE:  There is NO scoring penalty for mis-naming a tile. However…

c. A MIS-NAMED discarded tile may be claimed for MAH JONGG. The discarder is penalized the appropriate amount of points.

To further answer your question….we will continue to use the specific TOURNAMENT RULE noted above.”

1 thought on “A VEXING ISSUE!”