A group of my Mah Jongg students decided they wanted to have another afternoon of game play (I think they are hooked!) so we met the other day and played for a few hours. At first there were five of us (three students, S1, and myself) so I sat in for a few hands while S1 helped the students. Honestly, I have NEVER been dealt such a great hand during the Charleston – it was amazing. I thought at first that I might actually have a Heavenly Hand as I was picking up my tiles but of course, that would have to occur before the Charleston and my hand was not complete as we were about to start our first pass. But I did start out with four Jokers so I decided to try for a Quints hand. Now, to be fair, I was playing with absolute beginners so when the player across from me passed two Flowers (even though I thought I had been very clear about not passing Flowers except when absolutely necessary and never pass a pair of Flowers), I really felt good about going for the Quint. Then in the second across she passed me yet another Flower. Wow, I only needed one Flower to be discarded during game play to complete that combination.

After the Charleston I had three Flowers, one North, and three Eight-Bams, plus four Jokers. A Flower was discarded early on and so I called for it and exposed that combination of four Flowers. Ordinarily I would not call for a Flower and make that exposure so early on but I did want to make a couple of learning points to the students; I went around the table and asked each one if they could get an idea of what hand I might be playing…or not playing. I was pleased that they were able to make some good guesses.

Next, I drew a North during my turn. And then another North was discarded  which allowed me to declare Mah Jongg – you can see how early in the game this all happened by looking at this photo and seeing how few tiles had been discarded. Although a lot of the success of the hand was due to the fact that I was playing with novices who passed the wrong tiles in the Charleston, I still was very pleased when I declared Mah Jongg with this QUINTS hand of FFFF NNNNN 88888.

Next game I was dealt a bit of a screwy hand but I did see a lot of high odd numbers so I thought I would go for the 13579 hand of FFFF 5555 77 9999. My hand was coming together but I only had one 7-Crak and two had already been discarded which I could not call. Finally I had all my needed tiles except for a 7-Crak to complete the pair; I sat there hoping that someone would see that two of them were already out and thinking that it was a safe discard, would throw it out. And very late in the game the 7-Crak was thrown and I was able to win another hand. Just remember, I was playing with beginners…

At this point a fourth student came in and so S1 and I both sat out and supervised. And for me, this turned out to be the best game of the afternoon as one of the students declared Mah Jongg – almost at the the very end of the game – with a beautiful 369 hand of FF 3333 66 9999 DD. I couldn’t have been prouder of her! 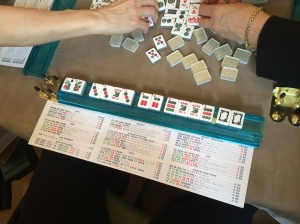 4 thoughts on “MAH JONGG WITH THE STUDENTS!”