I know that most people think that it is only women playing American Mah Jongg – and perhaps it is true that the majority of players here in the U.S. are women. But we are seeing more and more men taking up the game…and loving it! Here’s proof of that by way of our dear friend Donna in Central California –

This is funny and should bring a smile to your face.

Today we played at our Sr. Center in Santa Maria. There are always 8 tables set up but the most we have ever been is 29. Today we hit 32 people including all 4 men! All 8 tables were filled and some of the regulars weren’t even there.

What a fun afternoon we had.  We play from 12-4 with some people coming early and a few leaving before 4. We are thrilled with this turnout. Although some people complain about the noise level getting a bit too high when a game is over but it passes. I ring a little bell when it gets “too much”.

Anyway.. three of the  men happened to be playing with my sparkly pink set that Boots fondly nickname the “Barbie set”. I had the 4th man sit down for the pic and they were laughing about “tough enough to play Barbie”.. what fun..

The second pic is “packing up Barbie”. The man in the red shirt is one of the very best players. I was a little skeptical when I bought the “sparkly pink” set that people wouldn’t like it but I wanted something different and everyone thinks it’s fun, including me!

There was so much going on today that sometimes I feel more like a “social director” than a player but it’s all in good fun.

Smile… hope you are feeling good! 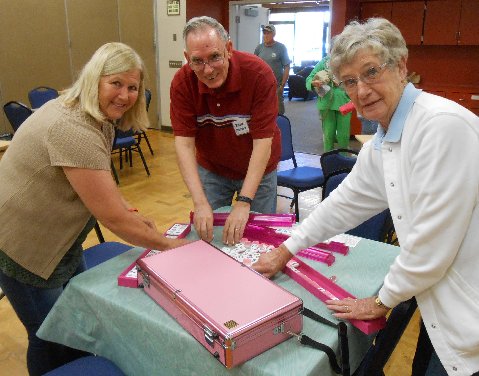 2 thoughts on “ABOUT MEN AND MAH JONGG…”