A while ago I received an email from Diane G asking for help on identifying a box containing bone and bamboo tiles, which she bought at an estate sale a few years back. I looked at the only photo of the tiles that Diane sent and am fairly confident that these tiles were made by the Mah Jongg Sales Company of America. 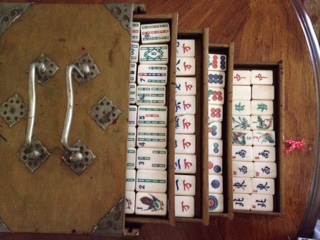 But the Mah Jongg Sales Company of America almost always put their name on their boxes – nowhere does their name or logo appear on this particular box. Apparently made of rosewood, this box has been painted gold and, as Diane pointed out, was clearly made for the American market as you can see from the words written in English, “MADE IN CHINA,” displayed on the back. 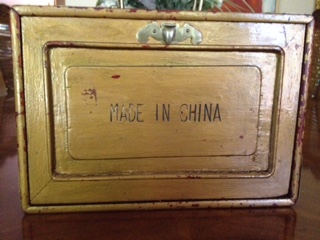 The question Diane is asking is whether or not this is the original box for these tiles. What company used the little guy holding perhaps a drum or a gong or a lantern – (I really don’t know what he is holding)? Which one of you out there has seen this logo before? Or, as I suggested to Diane, did the person who painted this box also add this sweet little figure that looks like something from an A.A. Milne book after he or she painted over the rosewood?

Tony? Tom? Michael? Any thoughts? Diane would love to know and now, so would I! Please send me your thoughts and I will publish them in a  later post.

And Diane, thank you for the lovely message you sent along with these photos – it means the world to me.

8 thoughts on “WHO KNOWS WHAT THIS IS?”