Here’s another photo found by the wonderful Toby Salk and this one is quite historic. From The Great Mahjong Book: History, Lore, and Play by Jelte Rep we learn that our beloved game was brought to our shores in 1920 by Joseph P. Babcock, an expat working for Standard Oil while living in Shanghai. Babcock and his wife were great lovers of the mystical Chinese tile game. Here is a bio of Babcock by Jelte Rep: 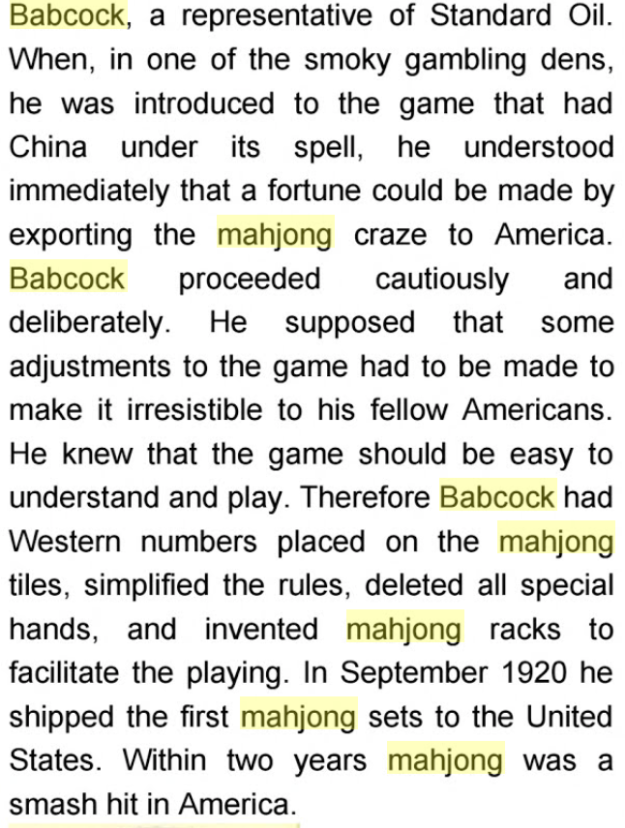 And here is the historic photo that Toby found… 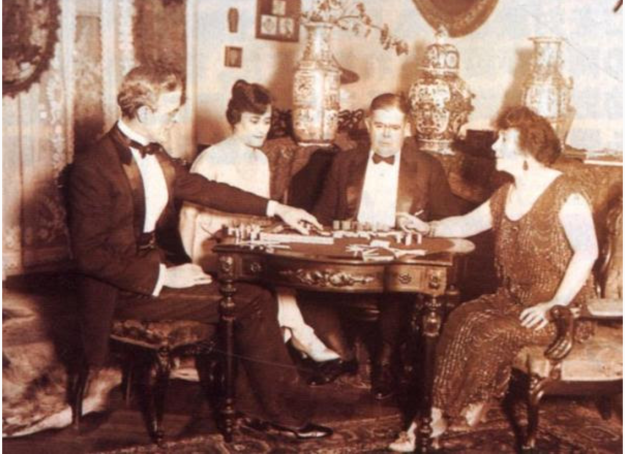 It is Joseph P. Babcock and his wife enjoying an evening of Mah-Jongg with their friends…we might be living almost 100 years later since the game came to America but we recreate this scene daily (maybe without the formal evening clothes!).

I love receiving emails from my dear friend Toby Salk who lives in my once-upon-a-time home of Berkeley, CA. Her email photos always bring a smile and I thought you might enjoy a couple of her most recent pictures. And, by the way, if you live in or around the Bay Area then you are lucky enough to either take Mah Jongg lessons from Toby or join in her Sunday Mah Jongg brunches and other Mah Jongg events. 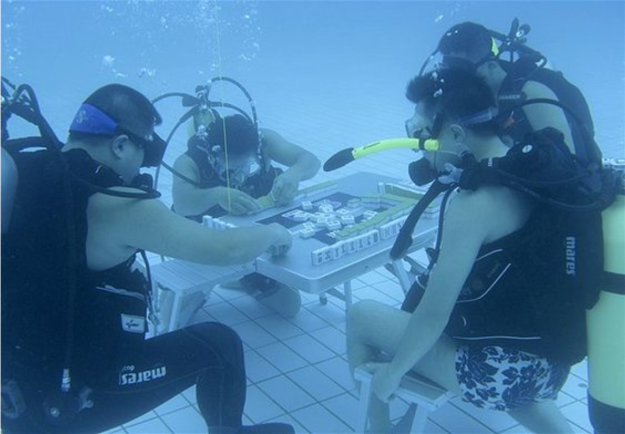 I love receiving emails from my dear friend Toby Salk who lives in my once-upon-a-time home of Berkeley, CA. Her email photos always bring a smile and I thought you might enjoy a couple of her most recent pictures. And, by the way, if you live in or around the Bay Area then you are lucky enough to either take Mah Jongg lessons from Toby or join in her Sunday Mah Jongg brunches and other Mah Jongg events.

And don’t forget about Toby’s big yard sale TODAY, July 22, 2017, from 10am – 2pm. Email me at ann@mahjonggandme.com for her address if you are interested in checking it out.

From a February 24th, 2017 issue of MentalFloss by Erin Blakemore:

FOUR VIEWS OF THE TILE FOUND AT 103 ORCHARD, VIA LOWER EAST SIDE TENEMENT MUSEUM

People have found some weird things inside walls over the years, from mummified babies to outrageously rare artwork. Other times, remodeling projects reveal nothing but mouse carcasses or a bunch of dust. This mah-jongg tile, found inside the wall of a former tenement building in New York City, might not seem fascinating at first. But it has an interesting story to tell about the many waves of immigrants that surged into New York during the 20th century.

The piece was found during a historical restoration project inside 103 Orchard Street, a building on New York’s Lower East Side that is owned by the Tenement Museum. The tile emerged when workers sifted through the debris in the building’s third floor. Just one of many unexpected artifacts found inside the building’s walls, it’s an example of the kind of object historians love—a little slice of everyday life.

You might think that the piece belonged to a family like the Wongs, Chinese Americans who lived in one of the apartments inside 103 Orchard starting in the late 1960s. But it could also have been owned by one of the Jewish families who lived inside the apartment building.

The mystery of the mah–jongg piece reflects the enigma of mah–jongg itself. It’s not exactly clear when the game was invented, or even how it’s properly spelled. (Merriam-Webster prefers mah-jongg.) What is certain is that after gaining popularity in China it came to the United States alongside Chinese immigrants in the 1920s. Despite harsh anti-Chinese laws that essentially banned Chinese immigration, many Chinese people risked deportation and came to the U.S. anyway, sporting false ID papers and, apparently, some mah–jongg sets.

As the game became more popular, it started to show up in department stores like Abercrombie & Fitch. The future purveyor of apparel for shirtless male models (which has been around since 1892) was the first U.S. company to offer the game, importing and selling over 40,000 sets in a single decade. 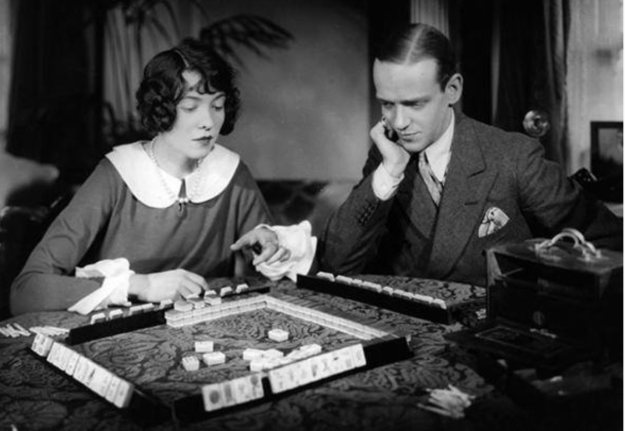 Mah–jongg also became a beloved game among Jewish women. For a while, the game was so popular that you could find mah-jongg books, magazines, clubs, and merchandise seemingly everywhere. Scholars believe that the game not only reflects globalization and immigration, but appealed to Jewish immigrant women as a way to build and keep social networks.

Though primarily played by wealthy and suburban Jewish women, it was popular enough that it very well could have been adopted in tenements, too. The days of mah-jongg–related movies and even ballets is long gone, but it’s actually become more popular in recent years, especially among younger Jewish women eager to learn the game their grandmas loved.

Whether the piece was owned by Chinese or Jewish immigrants, it shows how pastimes and traditions can cross-pollinate—and how a single building can contain remnants of multi-layered histories. And if you want to explore 103 Orchard for yourself, you’ll get a chance this summer, when the Tenement Museum opens a new exhibit there.

Find American-Style Mah Jongg Tournaments near you – these tournaments are authorized to award Master Points: http://www.mahjonggmasterpoints.com/tournaments/

Use this form to sign up and become Mah Jongg Master Points® Member:  http://www.mahjonggmasterpoints.com/members/

For more information or any questions, contact Gladys at  http://www.mahjonggmasterpoints.com/contact-us/ 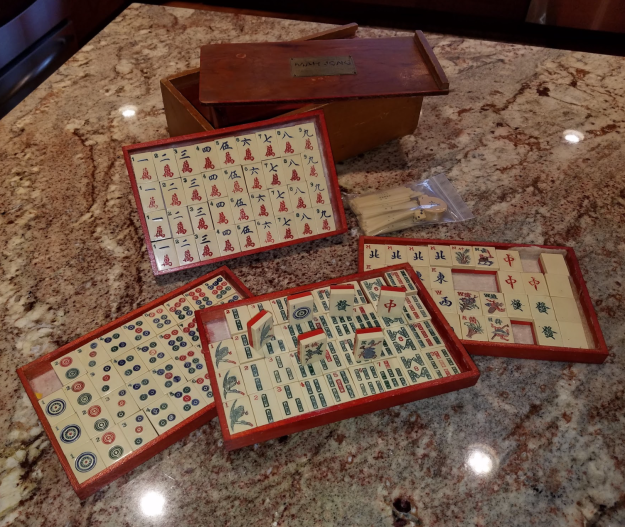 From our dear friend, Tony:

I have the same set from France, which I snapped up as a Buy It Now at a very reasonable price, as I’d never seen one like it before.
Like Mark, I’m not sure if this was produced before the Pung Chow factory was set up, or after it folded; either is possible… The box measures 290x155x90mm, made from finger-jointed wood stained red, with a slide top, a separator for the celluloid counting sticks cut-out to assist removal of the 4 trays solidly made from the same stained wood.
The gorgeous tiles measure 30x22x10mm with 45/55 white/red Pyralin (celluloid), sharp corner on top and rounded on the red – there is some colour variation on the red.
The designs are fairly standard; simple Circles, complex wan Craks, separated rod Bamboos, swooping crane Bambird.
There are a few tiles missing; 1-7 Cracks + 2 Craks; 1 Bamboo; 1 Red + 1 Green Dragon; no Flowers. I’m not sure if the flowers were deliberately omitted, emulating a Chinese set, or if they got lost.. but my friend Johni sent me pics of the Flowers if I ever try to re-create them..

Tony – thank you so much for chiming in…I KNEW you would have information on this gorgeous set!