Did anyone see CBS Sunday Morning yesterday (December 25th, 2016)? They did an entire segment on Chanukah menorahs and guess what showed up…that’s right – a menorah made of Mah Jongg tiles! Mah Jongg is EVERYWHERE!!!

There actually are many menorahs made up of Mah Jongg tiles – if you have one, please send me photos and I will post them.

And here is a two-toned version: 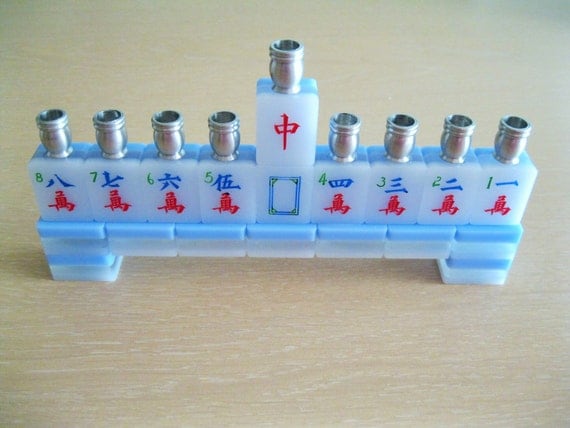 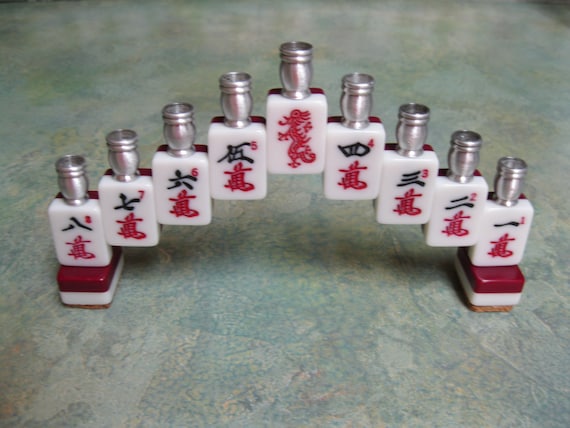 And one with the Mogen David as the holder for the Shamash or servant candle:

Even one made of earthenware… 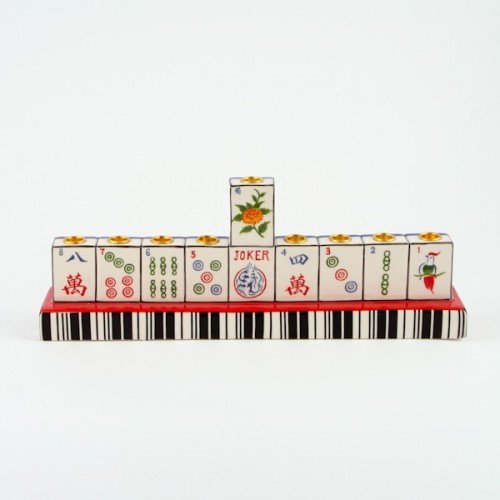 And, of course, there is a Mah Jongg Chanukah computer game with menorahs!

Just in case you were unable to watch last Sunday’s CBS Sunday Morning featuring Bill Geist’s segment on Mah Jongg Madness in Las Vegas, here’s the link to the YouTube video of that segment:  https://www.youtube.com/watch?v=PmFG5X_EdFY

Quite a while ago I came upon the following essay. I don’t remember where I found it and I don’t know who wrote but I thought it would be nice to share it with you as we all are starting a new cycle of Mah Jongg with the 2014 NMJL card.

If anyone does know the origin of this piece, please let me know and I will credit the author in a future post.

In Mah Jongg, as in Life, we start with a set number of random tiles.

They line up on the rack before us, like DNA sequences and chance circumstance.
We begin to make sense of the randomness, to arrange bams together, or
notice number sequences. We make sense of what we’ve been given to start
with. We form our core “identity” and try to make sense of it.

END_OF_DOCUMENT_TOKEN_TO_BE_REPLACED

We have a date! See the players from the Mah Jongg Madness Las Vegas Tournament and Tradeshow at Harrah’s interviewed by Bill Geist of the CBS Sunday Morning program on Sunday, April 6, 2014.

Don’t forget to tune in to CBS Sunday Morning on Sunday, April 6th!

As soon as I know the date of the Mah Jongg segment on CBS’ Sunday Morning, I will post it on this blog. In the meantime, enjoy this photo of Bill Geist sitting with Gladys Grad at the Harrah’s Las Vegas Tournament and Trade Show (photo courtesy of the Mah Jongg Madness March 2014  newsletter by Gladys Grad).
Before reading this month’s questions with their instructive answers, you might want to check out this video from the most recent tournament held at Harrah’s in Las Vegas – if you are in one of these photos, let me know if you would like your picture and a brief story about you at the tournament in a future posting on this blog.
Here are a few more questions and answers from the March, 2014 Mah Jongg Madness Newsletter by Gladys Grad, the Grand Master of American-Style Mah Jongg.
Q.  My opponent didn’t pick up the tile she claimed for Mah Jongg, until  I told her that she left it on the table.  Then I told her she was “dead.”  I called over the Director who said she wasn’t dead.  But I was right…right?
A. Opponents are pretty quick to jump on a player who has not picked up that final tile yet, after declaring and exposing for mahj. Some players might say, “I was just going to take that tile…I’m not dead!” -or- “You didn’t give me a chance!”
Unless a Director gets confirmation from at least 2 of the other players, the Director can’t make a fair determination.  Unfortunately, ohers at the table might say “I wasn’t really watching,” or, “I don’t want to make trouble.”(!?)
You actually helped your opponent when you gave her the “hint” – and she took it.  As a Director, if I see that all 14 tiles of the mahj hand are correct, then I may have no choice but to confim a “good Mah Jongg.”
Q. Player A discarded a 3Dot, Player B then discarded a Joker and said “same;” Player C then discarded another Joker and said “soap.”  Player D then said “take” for an exposure.  We all got mad at Player C  for purposely saying “soap,” but she said she could name her discarded Joker anything she wanted to?  Have you ever heard of this?
A. Yes, I’ve heard of this…..it’s a devious strategy that some players use to see if an opponent needs a tile (like that soap) for an exposure or for mah jongg.  They “convince” you that they “can name a Joker anything they want….it’s a ‘rule’.”  Some players will also purposely mis-name a tile for the same reason…that’s why in tournments, we require the discarder to provide the correct tile if it is in their hand.
You can name a discarded Joker: a “Joker;”  “Same;” or the name of the previously discarded tile…only.  Don’t fall for your opponent’s made-up “rule.”
Q. I played in a local Mah Jongg Master Point (MJMP) tournament, and the Director made up her own hands; she said we had to play 2014, instead of the required 2013 hands on the card.  Even though I won a prize, is she able to make up her own hands?
A. Directors have the option of making up their own “rules,” for their own tournaments….but the points for the made-up hands really won’t count for MJMP’s; and neither will the penalties for giving someone the made-up-mah-jongg; and creative digressions from the NMJL rules don’t count either.  You do have a choice,however, to play-or-not-to-play in these specialized tournaments.  If a Director follows all the other standardized rules for MJMP’s, but the scoring doesn’t qualify, you may still be able to receive the tournament-assigned-point(s) for playing only.