Lately I have been giving lectures about the cognitive benefits of Mah Jongg. Our beloved game is not only great fun but it is great exercise for the brain, too! Our wonderful friend, Sandra of Gehazi Collections, found an article from this past April about the resurgence of Mah Jongg within the senior community. The article is from the Patriot Ledger out of Massachusetts and was written by Susan Scheible. A tip of the dice to these beautiful ladies!

The Chinese board game of mahjongg is growing in popularity at local senior centers. “It stimulates the brain,” is a common refrain.

HINGHAM — Lorraine Crowell’s mahjongg moment came three years ago at a retirement community in Florida. “I discovered you can only zumba so much,” the Braintree resident said. “You have to find a sit-down activity. Mahjongg looked like a game that would help my brain activity and I enjoy a challenge.” She now plays twice a week in Hingham.

Rickie Moriarty of Rockland was captured by the Chinese board game when a neighbor recruited her; today she teaches others. “It really uses your mind, its fun and the people are lovely,” she said.

At age 82, Dick Ponte has been mastering mahjongg for 45 years and teaches a beginner’s class at the Hingham Senior Center. One lesson: “You focus on building your hand and don’t have to worry about letting a partner down.”

Challenging but fun, complicated but not impossible, the ancient game that uses Chinese tiles is making a comeback at local senior centers. You can find a drop-in session somewhere almost every day of the week if you are willing to travel and at the Rockland senior center, they are.

“We have people from Norwell, Abington, Weymouth, Braintree, Randolph, Stoughton, Hanover,” Moriarty said. The game of Mahjongg gained widespread popularity in the 1950s and 60s.

I heard about the game’s resurgence from Ginny Ballou. In an email, Ballou described the “Mahjongg Mavens (who) all met at the Hingham Senior Center about five years ago. From there we’ve become a close group who watch out for one another, check in on one another and continue to play mahjongg twice a week. All of us are over 70, several in their 80′s and darn, we are still having fun!!”

Ballou first heard of the game in the 1960s when she was in college and living in Brookline where “everyone played it.” She always wanted to learn and in retirement, when Ponte offered lessons back in 2011, she signed up. By 2013, this social networker was organizing tournaments.

A few weeks ago, I dropped by to see the Mavens in action and was intrigued as they all reached their hands together onto the tables to shuffle the sets of 144 tiles with Chinese characters and symbols. I asked them why they play.

“It’s just fun to play with friends and there’s no real big gambling,” said RosaLee Goldstein of Hingham, in her 80s.

“I thought it would help keep the mind active,” said Carol Anglin of Cohasset. “It’s a lot of fun because you’re not playing against anyone, just yourself,” added Chris Reeves of Hingham. “Socially it’s a great group of women, very welcoming.”

For Cecilia Hanrahan of Weymouth, the concentration the game requires is a stimulating challenge. Ann Millburg of Hingham took Ponte’s beginning course twice to make sure she had the basics.

A week later, I checked out the Rockland senior center where the reasons were similar and the friendships also strong.

Moriarty explained that mahjongg still requires a strategy and an ability to figure out what the other players are doing. “You have to be defensive and know how to sort your tiles based on several different characteristics,” she said.

“You use your brain, you really do,” said Barbara Lathrop of Braintree.

Some pick up the game more easily than others but Moriarty was firm: mahjonng “is never easy.” It takes time to learn. She will sit with a new student for several sessions and then have them join a game just to experience the give and take.

“Don’t give up!” was the take-home message of Ann Shannon of Rockland. “You think it’s hard, but it’s not that hard. Keep on going.”

I am LOVING my Mah Jongg zipper pull  – from Gehazi Collections – on my straw bag. I need to get more to put them on all my bags…and luggage…and my MJ coin purse…and EVERYTHING! Too fabulous!!!

Anyone who reads this blog knows how much I adore Sandra and the fabulous Mah Jongg-related gifts she sells on her site, Gehazi Collections.  And look what I just received from her collection:

Sandra’s packaging is so adorable and appropriate for a Mah Jongg gift:

And inside all of this…a stunning and unique zipper pull! OMG – I love this so much!!

Check out Sandra’s site for unusual and wonderful holiday gifts for your Mah Jongg friends. And let’s support her – she is running this business in Detroit (my hometown) and helping to revitalize the city:

I have blogged before about the wonderful Phyllis C in Naples, Florida. She has turned out to be a dear friend to me, even though we have never met in person (but I know we will some day!). Phyllis has been teaching Mah Jongg for many, many years and her students always become her dear, dear friends. She saw I had posted my “Ann Israel Eyeglass Leash” (available from Gehazi Collections) and, before you could blink, she had made dear friends with Sandra from Gehazi Collections! No one can resist Phyllis!

Here is an email – along with the above picture – that Phyllis sent to me and to Sandra at Gehazi Collections:

Here I am all decked out with my Mah Jongg eyeglass holder, along with my new gifts of my Mah Jongg bracelet (Mah Jongg Queen) and beautiful earrings given to me by my student and now dear friend, Diane M, in striped pink shirt.  Pictured are my previous students and now best friends, Lola and Lisa. Mah Jongg has given me so much. If the picture doesn’t show my precious Mah Jongg jewelry too well, I will have to try taking another one soon to truly show it off!!  Can hardly wait to show my class – plus my Mah Jongg friends – my treasures!!  So many wonderful friendships.  And I also have you two!!

Quite a while ago I posted a shout-out for help with finding a Mah Jongg teacher for Susan T. Our dear, dear friend, the wonderful Phyllis C, responded immediately. Yesterday I received the following wonderful message along with these fabulous photos from Susan. Her message really touched my heart and I am so thrilled about having a very small part in what appears to be a really special and lasting friendship. And also that Susan is now yet another Mah Jongg addict!

Hi Ann,
You told me you wanted to see a picture when Phyllis and I finally hooked up and we have some beauties here for you. I am having so much fun! I love mahjong and I love Phyllis! She is the nicest woman I’ve met in a long time, and an excellent teacher to boot.
Thank you so much for using your network to help me find a teacher. I really feel that because of your kindness I have found both a friend and an activity that I will cherish for a long time.
With gratitude,
Susan
The first photo is the license plate on the front of Phyllis’s  car.

The second photo is a picture of Phyllis and me,

and the third photo is a picture of Phyllis.

I want to add that I have never met Phyllis but through her wonderful emails I feel as if we have known each other forever – I must tell you that I feel the same way about her that Susan does – I adore this woman! By hook or by crook I will get to Florida this winter to give her a big hug! And this is the message I received yesterday from Phyllis (have I mentioned that I adore her?!!):

Ann, hopefully you have received pictures taken at my class this morning.  Sue T found me on your web-site and wanted to take pictures of her and me along with my front plate on my car. I am also wearing the “Ann Israel eyeglass holder” I purchased from Sandra Davis. Sue lives in my development in another sub-division 5 minutes away.   Hugs always, Phyllis

Like Loading...
You’ve heard me rave about Sandra at Gehazi Collections before and now I have to do it again! Look what she wrote on Twitter:

From Twitter:  She loved it so much that we named it after her. She said SHE was honored, but the truth is that it is WE are honored to know her! Thank you Ann for being such a wonderful fan and supporter.

Item is about 24″ and is dazzling in black and white. 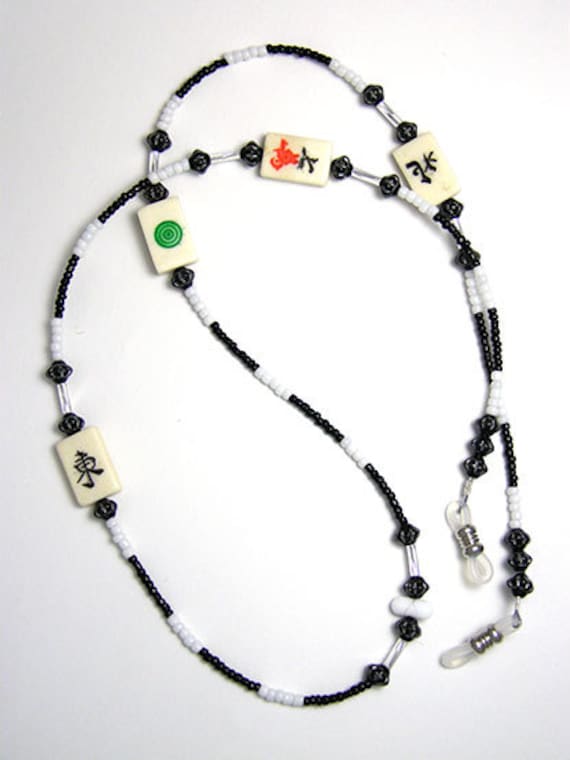 @mahj_ann She loved our black & white #mahjong eyeglass leash so much we named it after customer and fan Ann Israel! http://etsy.me/1HZZZBS

The truth of the matter is that I receive so many compliments on this eyeglass leash. If you need some Mah Jongg accessories, please think of Sandra at Gehazi Collections. And be sure to use this code – GEHAZI2015 – to get 20% off your order through the end of this year!