HAPPY HOLIDAYS TO ALL!

I hope you all are up and opening lots of great gifts…perhaps even a beautiful Mah Jongg set? Or maybe Santa brought you some good luck for picking Jokers?

Well, here is the best gift of all…our dear friend Joy has sent another one of her truly wonderful poems and was generous enough to allow me to share it with you. So…here it is – enjoy!

And have a very merry Christmas!

‘Twas our MahJ before Christmas
and here in the `burg
not a creature was stirring
not even my Bird!
The stockings were hung
by the chimney with care
in the hope that some new tiles
would soon appear in there!
With the four of us girls
waiting to visit
it was time to discuss
our seasonal tickets.
When all of a sudden
there arose such a clatter
We ran to the table
to see what was the matter.
It was clicking and clacking
of tiles being mushed
Adding to the excitement
And now comes the hush…
As the walls are all stacked
waiting to be broken
And everyone wondering
would ‘Mah Jongg‘ be spoken?
With a roll of the dice
then a pass to the right
Wondering how many games
will we play on this night?
With the dealing completed
and the Charleston done
We all settled down
for a whole lot of fun!
More rapid than eagles
the tiles they did fly
I’m waiting for that Dragon
Did it already pass by?
On Bams, Dots, and Craks
And the Winds all in line;
Should I take that discard
Should it be mine??
Wondering how many Flowers
have already been picked,
I only need two more now
hope I don’t get tricked.
With visions of Jokers
Swirling ’round in our heads
Did I choose the right line,
or, will I soon be ‘dead‘?
The moon how it shines
on those tiles – what a sight!
We’re all sitting so still
Will this be the night?
Should I change my hand now
From Exposed to Concealed?
It’s almost impossible
Can this really be real?
One tile to go and
I feel like I’m winning
I can hardly sit still –
My head now is spinning!
My draw is that Dragon
What a sight to behold!
Now I declare ‘Mah Jongg‘
And the truth must be told:
I just love this game
Whether I win or not
It’s fun playing Mah Jongg
I’m so glad I was taught.
And we heard it exclaimed
as we packed tiles away…
Have a Merry MahJongg Christmas
and a Happy New Year’s Day!
jonggjoy

I know this question comes up frequently and is one of those issues that causes much discussion. Well, leave it to the Grand Master of American-style Mah Jongg, the wonderful Gladys Grad, to provide us with a definitive answer!

A player had 4 RED Dragons already exposed on her rack from a previous call for one of the Red Dragons.  She declared Mah Jongg and picked up a 6 Bam and added 2 Jokers with it on her rack.  Then she proceeded to expose the rest of the Mah Jongg hand. She put three 8 Bams on the rack and then two 2 Craks and two 4 Craks.  Of course the hand was dead as she needed two 2 DOTS & two 4 DOTS because the hand calls for 3 suits. Now another player says that since she exposed the 6 Bams first with the 2 jokers, that that part of the hand was still available for exchanging the joker.  Was the Joker in the 6 Bam exposure still viable?  VS, CA

A. No, that Joker was NOT viable.  If it had been a Joker in the previously exposed Red Dragons, then it could be exchanged.  But the 6 Bam exposure made with Jokers was still part of the current turn that resulted in it being declared a dead hand.

I hope this will help those of you who are still not sure when a Joker is still viable in a dead hand. Send me some of your situations with dead hands and Jokers and I will post them on a future blog. 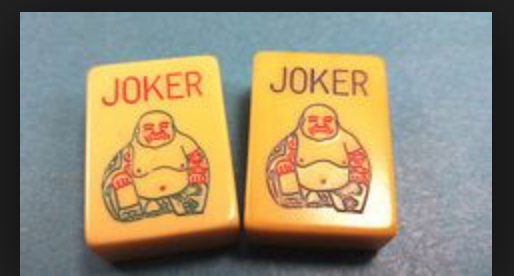 A few days ago I published a posting about the history of Jokers found in our Mah Jongg sets. I noted that I did not know who had originally written the article but asked the readers of this blog to let me know if they had any idea. Well, two of the mavens of the game, Tony and Annelise, both contacted me and told me that the article had come from none other than our dear friend, Tom Sloper. You can see the original article From Tom’s Sloper on Mah-Jongg, written on February 26th, 2012, column #509. Yet another mystery solved thanks to two really wonderful friends in our fabulous Mah Jongg community.

I was just looking through my files and found this very interesting (at least it is to me!) article about the history of Jokers in Mah Jongg. People are always asking if I can tell how old their set might be. When asked this question the first thing I want to know is if your set has “natural Jokers.” Of course, that is not the only determiner of the age of a set – and, as you will read in this article, it is not always accurate –  but it is a good place to start.

Unfortunately, I have no idea who wrote the following article or where it was published. If anyone knows, please email me so that I can give it the appropriate credit. In the meantime, enjoy this article on the history of Jokers.

In the 1920’s, the standard Mah Jongg set came with 8 Flowers and 0 Jokers (8F/0J). From the founding of the National Mah Jongg League in 1937, the NMJL treated Flowers as Jokers (wild Flowers). Beginning with the 1943 card, more Flowers were added to increase the luck ratio and to allow for more challenging hands.

Some, but certainly not all, American Mah Jongg sets came with Jokers before the NMJL first started requiring them in 1960-61. The number of Flowers and Jokers in a set isn’t necessarily a reliable indicator of the exact date of manufacture of an American set, but an understanding of the NMJL’s fluctuating use of Flowers and Jokers does give some clues.

If you have a set with only 2 natural jokers but 14 Flowers, it was probably made in America in the early 1960’s. Domestic set manufacturing began in the1920s and continued into the 1960s. At some point, though, cheaper Chinese imports caused all the American manufacturers to go out of business. Those Chinese companies aren’t always sure what the NMJL requires, so Chinese sets made today often come with extra Flowers and jokers (more than 8F/8J).”

And now, believe it or not, it is time to order your 2018 National Mah Jongg League cards, which will be mailed out to you in late March/early April. Just go to the League’s website here and follow the instructions. The earlier you order, the sooner you will receive your new NMJL cards!

…I am sending you all good thoughts that you received everything you wished for…including lots of Jokers in your Mah Jongg games!