You know that I frequently post photos and news about our friend Donna in Central California. Recently Donna and one of her Mah Jongg groups had a one year anniversary party. Here are some photos from that party. But be sure to scroll all the way down for an interesting insight into this special woman.

Some of the attendees in the next two photos. You can see part of a poster with Mah Jongg hands on it on the wall. If you won one of those hands, you went up to the poster and wrote your name after the winning hand. Prizes were issued at the end of the day. 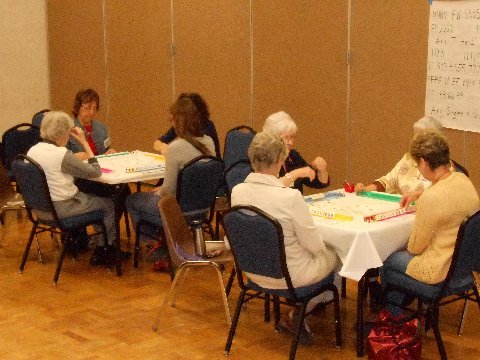 This is Mary who started the Mah Jongg playing in Santa Maria about 25 years ago. She holds a tournament twice a year at her home. She “ceremoniously” cut the brownie cake.

In this photo she is wearing a  wonderful Asian apron that was her special gift.

This photo was taken just before the prizes were presented.Mr. Alex, the terrific guide dog, is sitting front and center!

Every time someone declared Mah Jongg,  their name went into a box. The woman on the right won $15 for having her name pulled; the woman on the left had her name drawn next and she won $5.00.

Boots (on the right) had the most Mah Jonggs – FIVE! – and Diane (on the left) had four. They both received magnetic Mah Jongg tiles.

Here are the people who won specific hands. Boots won twice and Donna (far right) won once. The 2nd and 3rd women from the left are new players (and were Donna’s students) – one of them won on a Quints hand – you can only imagine how proud Donna was of her! Everyone here is holding lottery tickets that Donna bought for special prizes. Boots had two tickets and luckily won a free ticket on each one!

These 6 people did not have any winning hands – Donna had chocolate bars and boxes of Dots candy for them. They didn’t know what they were getting and she had them put their hands behind their backs and say “c” or “d” to claim their surprise gift. Love this!

Here are two attendees who came dressed according to the Mah Jongg theme!

So, it is clear that Donna really knows how to put on a great Mah Jongg event. But I had wondered what her background was all about – her (and our!) dear friend Boots was kind enough to let me know all about her. This is one very, very special lady – and I am honored to be her friend. You are not going to believe her background…all I can say is WOW!

Just wanted to send this directly to you, rather than posting it. First of all, thanks for the birthday greetings.  I find it totally impossible to rationalize the fact that I’m 84!

I really wanted to share some thoughts on Donna.  I call her my “almost daughter” and she calls me “other mother.”  Donna was a special ed teacher  (in the same school  AND in the same classroom) for over 30 years.

Now that she’s retired, she is so busy using the pent up energy that obviously was stored up that I can’t believe it. She runs, jogs, walks all over town, participates in many charitable and recreational walking and running events, and, goes to exercise, zumba, and yoga several times a week.

She and her wonderful husband, Greg, have recently retired as professional photographers.  They’re both active in the local Corvette club, Greg plays in a community college band and is retired city planner. Donna has just been appointed to a committee on Active Aging through our local Recreation and Parks Dept.

And then there’s Mah Jongg. She is a great teacher, and you already know how innovative she is.  She has taught at least 30 people free of charge within the last year. Initially, we had a group of people who met on the 2nd and 4th Fridays at a local mobile home park clubhouse.  Sometimes we had three tables, seldom more than four.

A year ago, we started at the local senior center and made it a drop-in game. We created an e-mail newsletter that goes out the early part of the week. Now, the room is available every Friday and we are up to six tables and still growing, thanks to the human dynamo.

In addition to this, she plays in a regular Tuesday evening game, and hosts a Wednesday group in her home twice a month to enable her newer players to get more experience.

We bake together periodically (I now have a personal scullery maid!) so that she can learn how to do some of my old recipes.  We’ve made challah, kichel, various coffee cakes, with more sessions coming up. She and Greg photographed our 65th anniversary, and she put together the most remarkable album as their gift to us.

We e-mail, phone, instant message, etc. almost daily, and she still manages to stop by with some goodie or another. When we collaborate on the bi-monthly mahj newsletter, or the greeting card that we made for you, it is such a joy to bounce ideas off each other, back and forth. Just an example, when we did the first card for Julie Coolidge, the one who broke her collarbone, Donna’s first idea about it came while she was standing on her head at yoga class!  Then she let me know what she came up with, and we ran with it from there. Then I usually proof our finished product, and am now called “Eagle Eye.”

With all of this, I’ve barely skimmed the surface of what this “young” woman does for us and for many others.

Wishing you a “Refuah Schlemah” , with continued good health, and of course, a complete recovery.